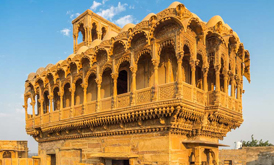 Jaisalmer has been dubbed the `Golden City` because of the honey colour imparted to its stone ramparts by the setting sun. No one who makes the effort to get to this remote sandy outpost leaves disappointed. Centuries ago, Jaisalmer`s strategic position on the camel train routes between India and central Asia brought it great wealth. However the rise of shipping trade and the port of Bombay saw the decline of Jaisalmer.

How to reach Jaisalmer

By Air : The nearest airport to Jaisalmer is Jodhpur.

By Rail : Jaisalmer is on a broad gauge line that connects it to Jodhpur. It is an overnight journey from Jaisalmer.

Jaisalmer Fort From atop the Trikuta Hill, the Jaisalmer Fort casts its magical spell in the heart of every tourist. The fort was constructed by Rai Jaisala in the 12th century when he wanted a more secure place than Lodurva to serve as his capital. The fort is a symbol of an era gone by that is still alive in in its remnants.

Jain Temples There is a group of five temples lying within the fort and built between the 12th and 15th centuries, these temples are an achitectural marvel. Visitors are allowed only till 12 O' clock in the afternoon.

Nathmalji Ki Haveli Elephants carved out of yellow sandstone guard this Haveli built by the Prime Minister of Jaisalmer in 1855. Two brothers, Hathu and Lallu constructed each side of the haveli. The whole mansion looks perfectly harmonious but you will notice that the right and left side of the building differs slightly in details.

Patwon-Ki-Haveli is one of the most exquisite haveli's with beautiful latticed facade.

Salim singh-Ki-Haveli is just three centuries old, and is still lived in, its arched roof is held up by well excluded brackets in the form of peacocks.

Gharisar Gharisar had once supplied water to the city; a courtesan has built the temples and archways around it.

Camel Ride at Sam Desert 45km. west of Jaisalmer, are the proper sand dunes and popular with camel safaris. this Jaisalmer's nearest real sahara like desert.the ripples on the wind caressed dunes create enchainting images a photograph's delight. The sand shimmers under the glow of hotel sun highlighting what actually a desert stands for. various cultural programmes are organized again the backdrops of these fascinating dunes.