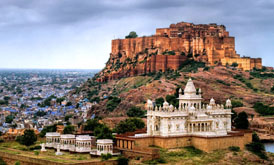 World famous for the baggy horse-riding trousers of the same name, Jodhpur is the second largest city in Rajasthan. Situated in the fringe of the Thar desert the city was founded in 1459 by Rao Jodha, a chief of Rajput clan known as Rathores. The old city is still surrounded by a 10 km long wall, built about a century after Jodhpur was founded.

How to reach Jodhpur

By Air The Jodhpur airport is 5 km from the main city. Airlines link Jodhpur with Bombay and Delhi, usually on flights that also connect with Jaipur and Udaipur. One can take taxis or auto-rickshaws from the airport to the city.

By Rail Jodhpur is on the Western Railway broad gauge network in Rajasthan, and is linked to various centres in the region by express and passenger trains. Some important links are those that connect with New Delhi, Agra, Jodhpur, Jaipur, Udaipur and Ahmedabad.

Meherangarh Fort Considered as the most impressive fort in Rajasthan and one of the biggest in India, the Meherangarh fort is sprawled atop a perpendicular hill, 5 km uphill drive from the main city. Its imposing walls have withstood many attacks by invading armies, the first gate of the wall is still scarred by cannonball hits. The original fort was built by Maharaja Rao Jodha in 1459, when he shifted his capital from Mandore to Jodhpur.

Jaswant Thada is another interesting Tourist places in Jodhpur which is built in white marble, in the memory of Maharaja Jaswant. This edifice was built in the year1899. Tourists must make it a point to visit this place among other Tourist Attractions in Jodhpur.

Umaid Bhawan Palace The Umaid Bhawan Palace was built between 1929 to 1942 as a famine relief project that gave employment to more than 3000 famine struck people. Today, parts of the palace have been converted into a luxury hotel, and a museum while one extensive wing is still occupied by the royal family.

The palace was built by Maharaja Umaid Singh and designed by the president of the British Royal Institute of Architects. Marble and red sandstone was used to built this opulent structure though no cement was used in its construction. The museum at the palace houses an assortment of beautifully crafted weapons, stuffed leopards, clock collections, and Chinese urns. 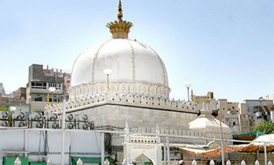 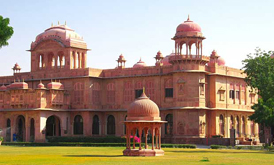